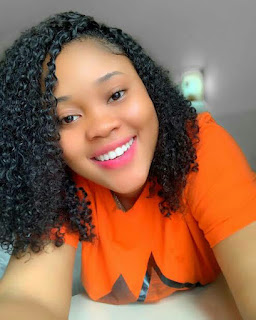 The Nollywood filmmaking industry is blessed with many actresses from Imo state, and the majority of these actresses are very popular and famous, some are even talented with various skills, and others are creative.

Today, 9jabazeinfo will like to introduce you to one of the best fast-rising Igbo actresses from Imo state, Chioma Blessing Nwaoha also known as Spanky Diva.

Chioma Nwaoha was born on November 2nd in 1995, as Chioma Blessing Nwaoha.

She was born into a Christian family from Imo state in south-east Nigeria.

Spanky Diva attended primary and secondary school in her home state of Imo before graduating with a Bachelor’s degree from the University of Port Harcourt.

Spanky Diva was inspired by veteran actress “Mercy Johnson” and decided she wanted to be an actress one day, so she began acting in drama and stage plays in high school.

Chioma Nwaoha, also known as Spanky Diva, broke into the Nollywood filmmaking industry and rose to prominence after appearing in the film “Kings Wife.”

This movie went viral in its own right, and the role she played in it was very impressive, inspiring many movie producers and directors.

Since then, Spanky Diva has appeared in multiple films like; Bishop Girls, Woman on Fire, King of Men, Festival of Seduction, Bad Blood, and others.

As we speak, this Igbo actress is now one of the most well-known actresses, and her outstanding performance has earned her numerous awards.

When it comes to beauty, Spanky Diva is one of the most beautiful Nollywood actresses. Her beauty is supernatural because she looks stunning with or without makeup.

She has a light complexion, an elegant personality, and a good body shape.

Her real name is Chioma Blessing Nwaoha but famously known as Spanky Diva.

Chioma Nwaoha has been featured in many Nigerian movies since from her first movie debut. She has appeared in over 50 movies, some of them includes;

Chioma Nwaoha is not yet married and has no children. Meanwhile, the actress has not post any photos on any of her social media accounts indicating that she is engaged or in a relationship.
As a result of this, we can say that the actress is currently single and not engaged, nor seeing any man.

Chioma Nwaoha is a young and beautiful actress who is not afraid to flaunt her body on social media. Day by Day, she keeps entertaining people with her gorgeous photos.
This trick earn her a huge fan base on Instagram with almost 1 Million followers on her main Instagram page @chioma_nwaoha.

The estate net worth of Chioma Nwaoha as of 2022 was around $350,000. Making her one of the top richest fast rising Igbo actress in the industry.
Read Also: Yousef Biography, Real Name, Age, Instagram And Net Worth